According to Field Yates, the Raiders have restructured the contracts for LT Kolton Miller and RB Kenyan Drake. 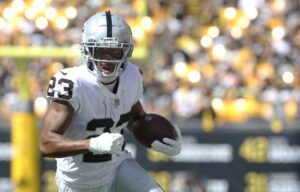 The moves create just over $14.5 million in additional cap space for the Raiders this offseason.

The contract included a fifth-year option for the Raiders to pick up in 2021 that was folded into the deal.

In 2021, Miller appeared in all 17 games for the Raiders and made 17 starts at left tackle. Pro Football Focus had him rated as the No. 5 tackle out of 83 qualifying players.

Drake, 28, is a former third-round pick of the Dolphins back in 2016. Miami traded him to the Cardinals before the 2019 deadline in return for a conditional sixth-round pick that can become a fifth-rounder.

Drake finished the final year of his four-year, $3.5 million contract and made a base salary of $810,000 for the 2019 season. However, Arizona opted to transition tag Drake for the 2020 season.