According to Field Yates, the Raiders have restructured LB Cory Littleton‘s contract to add $3.4 million in additional cap space. 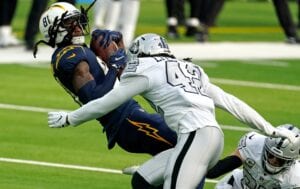 Las Vegas converted $4.25 million of Littleton’s base salary into a signing bonus and spread it over the remainder of his deal.

The Raiders added three void years to Littleton’s deal in another restructure earlier this offseason.

Littleton, 27, is a former undrafted free agent out of Washington signed by the Rams in 2016. He played out the final year of his three-year, $1,635 million contract before returning to the Rams on a one-year restricted deal worth $3,095,000 for the 2019 season.

The Raiders signed Littleton to a three-year, $36 million contract that included $22 million guaranteed in 2020. He’s slated to make base salaries of $1.25 million and $11 million the next two seasons.

In 2021, Littleton has appeared in two games for the Raiders and recorded 15 total tackles and no sacks or interceptions.