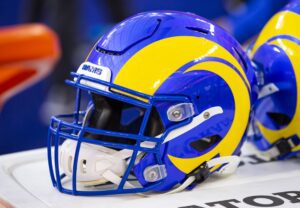 Breer points out the Rams are behind only the Texans, Bears and Broncos in the waiver priority order, so if they want Mayfield, there’s a good chance they’ll be able to land him.

The team has been wracked by injuries and especially at the quarterback position. Starting QB Matthew Stafford is on injured reserve with some kind of neck issue.

The Rams would be responsible for Mayfield’s remaining $1.35 million in salary for the rest of the 2022 season. He’s scheduled to be an unrestricted free agent in 2023.

Mayfield, 27, was drafted with the No. 1 overall pick out of Oklahoma in 2018. He just finished the fourth year of a four-year, $32.68 million rookie deal that included a $21.85 million signing bonus.

The Browns exercised Mayfield’s fifth-year option which would have cost Cleveland $18.858 million fully guaranteed in 2022. However, Cleveland traded Mayfield to Carolina in exchange for a conditional 2024 fourth-round draft pick.

Cleveland agreed to cover $10.5 million of Mayfield’s salary with the Panthers paying out the rest. However, Carolina cut Mayfield earlier this week.

In 2022, Mayfield has appeared in seven games for the Panthers and completed 57.8 percent of his passes for 1,313 yards, six touchdowns and six interceptions. He has also rushed for 52 yards and a touchdown.

We will have more news on Mayfield as it becomes available.