The Los Angeles Rams announced that they are promoting WR Brandon Powell to their active roster for Week 18. 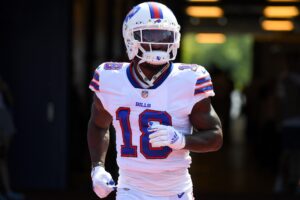 Powell, 26, wound up going undrafted out of Florida back in 2018 before signing a three-year, $1.71 million contract with the Lions. Unfortunately, Detroit waived coming out of the preseason in 2019 and he eventually signed on to the Falcons’ practice squad.

The Falcons declined to tender Powell a qualifying and he signed with the Bills as an unrestricted free agent. However, he was among Buffalo’s final roster cuts coming out of the preseason and he briefly caught on with the Dolphins’ practice squad.

In 2020, Powell appeared in 15 games for the Falcons and caught 12 passes for 69 yards receiving and two touchdowns while rushing for seven yards on two carries. He also contributed 343 kick return yards and another 152 punt return yards.