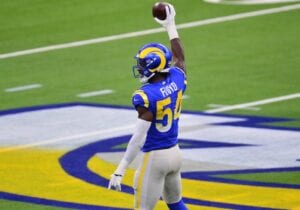 According to Adam Schefter, Floyd is signing a four-year, $64 million contract with the Rams.

The Giants were reportedly making a late push to sign Floyd. However, the Rams were clearly serious about retaining him long-term.

However, Chicago released Floyd before the option became guaranteed at the start of the 2020 league year. He later agreed to a one-year contract with the Rams.

In 2020, Floyd appeared in all 16 games for the Rams and recorded 55 tackles, 10.5 sacks, a forced fumble, two recoveries and a pass defense.