The Rams activated RB Cam Akers from injured reserve this past week with three games still to go this season. But Ian Rapoport says the plan is for Akers to continue to work toward being ready to play in the postseason. 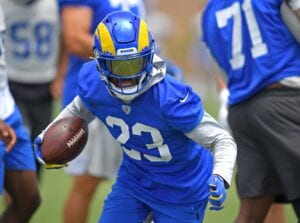 Akers tore his Achilles back in July and a standard return is six to nine months. The injury has been a career-killer for running backs as well. But Akers made it back in just five months and videos from practice have shown him looking spry.

“If you watched him do stuff with the performance staff (Thursday), you would think he could carry the ball 40 times on Sunday,” Rams GM Les Snead said. “The plan is to implement him back into practice settings and make sure he can make football moves, rather than just observing. And from there, it’s how that Achilles recovers. We’ll be smart about it.”

Right now, Akers has been activated just for pension benefits and it appears the Rams are saving him for what they hope is a deep playoff run.

“That’s our vision,” Snead said. “He’s really day to day now. Based on everything he’s done now and how he’s looked, I would take that bet.”

We’ll have more on Akers as the news is available.