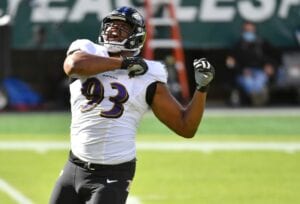 Campbell, 34, is a former second-round pick of the Cardinals back in 2008. He spent nine years in Arizona before signing a four-year, $60 million contract that included $30 million guaranteed with the Jaguars for the 2017 season.

The Jaguars traded Campbell to the Ravens this past March and later signed him to a two-year deal worth $27 million total with $20 million guaranteed.

In 2020, Campbell has appeared in eight games for the Ravens and recorded 24 tackles, four sacks, and six passes defended.