According to Ian Rapoport, the Baltimore Ravens are releasing DT Justin Ellis as part of their cutdown to 53 on Tuesday. 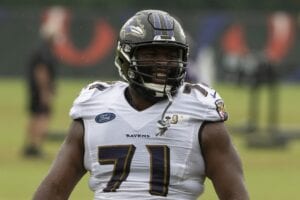 Rapoport also reports the Ravens are interested in bringing Ellis back on the practice squad.

Ellis, 30, was drafted in the fourth round by the Raiders back in 2014. He played out the final year of his rookie contract when he agreed to a three-year extension worth over $15 million in 2018.

The Raiders placed Ellis on injured reserve coming out of the preseason in 2019 with a knee injury and later cut him with an injury settlement. From there, he agreed to a deal with the Ravens and returned to Baltimore last year.

This past offseason, Ellis re-signed with Baltimore on a one-year, $1.2 million deal.