According to Field Yates, the Ravens have restructured CB Marlon Humphrey‘s contract to save $7.172 million against the cap in 2022. 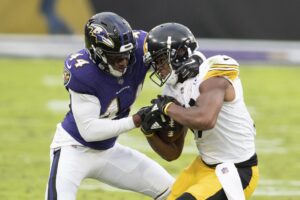 Baltimore converted just shy of $9 million of Humphrey’s $10 million base salary into a signing bonus and spread it out over the remainder of his deal.

This gives the Ravens some wiggle room, as they were previously last in the NFL in cap space.

Humphrey was set to make base salaries of $10 million and $10.5 million over the next two seasons.

In 2021, Humphrey appeared in 12 games for the Ravens and recorded 58 total tackles, one interception, a forced fumble and 13 pass deflections.