Jordan Schultz reports that the Browns WR Odell Beckham Jr. will play in Week 3’s game against the Bears, barring any final setbacks with his knee. 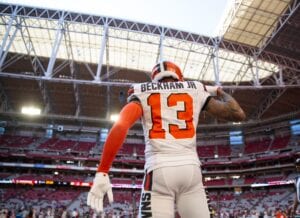 Earlier in the day, Browns OC Alex Van Pelt told reporters that Beckham will be a game-time decision on Sunday.

Beckham has been inactive the first two weeks of the season as he works his way back from a torn ACL he suffered last year.

In 2020, Beckham appeared in seven games and caught 23 passes for 319 yards receiving and three touchdowns before tearing his ACL. He also rushed for 72 yards and a touchdown.