According to Nick Underhill, the Saints are releasing OL J.R. Sweezy ahead of Tuesday’s deadline. 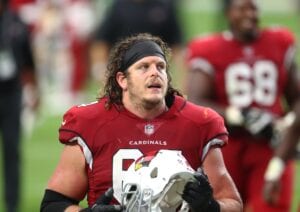 Sweezy, 32, is a former seventh-round pick of the Seahawks back in 2012. He played out his rookie contract with Seattle before signing a five-year, $32.5 million deal with the Buccaneers in 2016.

Sweezy was two years into his deal with Tampa Bay when they cut him loose in a move that freed up $6.5 million of cap room. He signed a one-year deal with the Seahawks shortly after.

The Cardinals signed him to a two-year, $9 million contract through 2020. He signed a one-year deal with the Saints earlier this month.