Per Nick Underhill, the Saints are placing QB Blake Bortles on the COVID-19 list, as well as activating WR Chase Hansen and TE Nick Vannett. 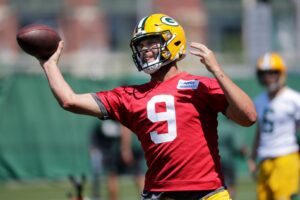 Bortles caught on with the Rams on a one-year, $1 million deal for the 2019 season. He then signed on with the Broncos and was on and off of their roster before signing on briefly with the Packers this past May.

Green Bay brought Bortles back after Aaron Rodgers tested positive for COVID-19 and after being let go he caught on with the Saints.

For his career, Bortles has appeared in 78 games and completed 59.3 percent of his passes for 17,649 yards, 103 touchdowns, and 75 interceptions. He also rushed for 1,766 yards and eight touchdowns.