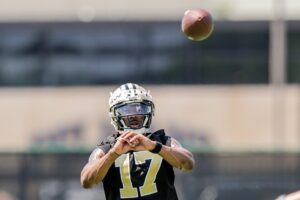 White, 30, is a former No. 7 overall pick by the Bears out of West Virginia in the 2015 NFL Draft. He played out the final year of his four-year, $16.563 million fully guaranteed rookie contract.

White signed a one-year contract with the Cardinals in 2019 but was cut before the start of the season. From there, he had a short stint with 49ers before he caught on with the Saints. White has bounced back and forth between the practice squad and active roster in New Orleans for going on two seasons now.

In 2022, White has appeared in seven games for the Saints and caught two of five targets for 74 yards.