According to Nick Underhill, the Saints are signing LB Chase Hansen to the roster. 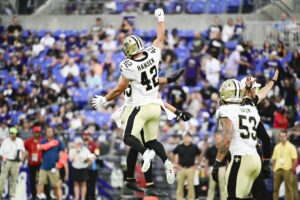 Hansen was with the Saints before, which makes this the second time New Orleans has tried to turn to a familiar face for depth at linebacker.

They signed Kiko Alonso last week, only for him to retire after just one practice.

Hansen, 29, signed with the Saints as an undrafted free agent out of Utah back in 2019. He agreed to a three-year, $1.755 million contract but was placed on the non-football injury list with a back injury.

Hansen missed the entire 2019 season and was placed on injured reserve with a knee injury. Since then, he’s been on and off of the Saints’ roster.

For his career, Hansen has appeared in five games for the Saints but has yet to record a statistic.