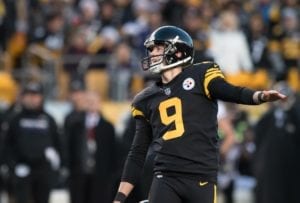 This officially opens a three-week window of time for the Steelers to activate him or he would miss the remainder of the season.

Boswell, 31, originally signed on with the Texans as an undrafted free agent out of Rice back in 2014. He was among Houston’s final roster cuts coming out of the preseason and signed on to their practice squad.

The Texans wound up cutting him after a week and he eventually signed a futures contract with the Giants. He was, again, among the team’s final roster cuts and eventually caught on with the Steelers.

In 2022, Boswell has appeared in seven games for the Steelers and converted 12 of 16 field goal attempts (75 percent) to go along with all nine extra point tries (100 percent).