Chris Mortensen reports that Steelers DL Stephon Tuitt did, in fact, suffered a torn pectoral muscle and is out for the season.

You can expect the Steelers to place him on injured reserve in the coming days and add someone to their roster.

Ian Rapoport of NFL Media reports that the Steelers fear is that DE Stephon Tuitt has at least a partially torn pec and possibly a fully torn pectoral muscle.

According to Rapoport, the Steelers are still awaiting the results of an MRI to determine the severity of the injury, but Tuitt could be looking at surgery for a fully torn pec, which would cost him the remainder of the season.

Rapoport adds that there are some pectoral injuries that can be played through, but the expectation is that he’ll miss at least a few weeks with this injury.

Tuitt, 26, is a former second-round pick of the Steelers back in 2014. He’s entering the third year of a six-year, $61 million contract that included an $11 million signing bonus.

Tuitt agreed to restructure his contract for the second straight year this past July in a move that created $3.9M in cap space.

In 2019, Tuitt has appeared in six games for the Steelers and recorded 22 tackles and 3.5 sacks.

We’ll have more regarding Tuitt as the news is available. 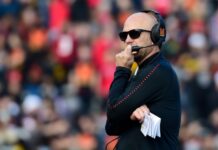