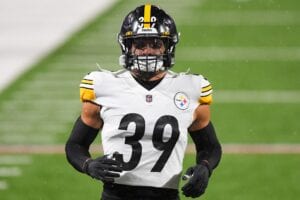 Fitzpatrick apparently hurt his write in a bike accident so this move was expected.

Fitzpatrick, 25, is the former 11th overall pick in the 2018 NFL Draft by the Miami Dolphins. He signed a four-year, $16.447 million dollar rookie contract that included a $10.042 million dollar signing bonus.

The Steelers exercised Fitzpatrick’s fifth-year option which was scheduled to pay him $10.612 million in 2022. He later signed a four-year, $73.6 million extension with Pittsburgh.

In 2021, Fitzpatrick appeared in 16 games for the Steelers and recorded 124 total tackles, one forced fumble, one recovery, two interceptions and seven pass deflections.