Jeff Darlington says based on his conversations with sources, he believes contract talks between the Cardinals and QB Kyler Murray are going smoothly. 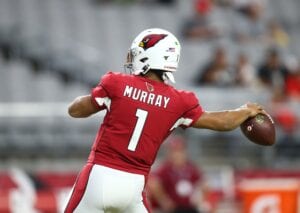 He adds there’s a good chance the deal is completed before the Cardinals begin training camp on July 26.

There was a lot of tension between the two sides earlier this offseason but Murray reported for OTAs and Darlington says it feels like the drama is in the rearview mirror.