The Houston Texans announced on Monday they have finalized their coaching staff for the 2022 season under new HC Lovie Smith.

He was the assistant head coach/QBs coach for the Browns in 2016 and returned to Harbaugh’s staff at Michigan in 2017. From there, Hamilton served as the head coach and general manager for the XFL’s DC Defenders before being hired by the Chargers as a QB coach.

He joined the Texans in the same capacity in 2021. 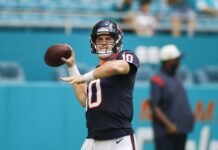