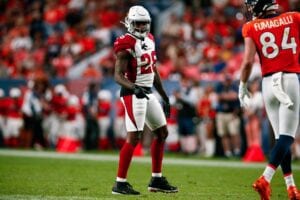 These moves will create around $1.5 million of cap space for the Texans.

Williams, 28, is a former third-round pick by the Cardinals in the 2016 NFL Draft out of Texas A&M. He was entering the final year of his four-year rookie contract when Arizona waived him with an injury designation.

The Giants signed Williams to a contract last year but he was later released and eventually signed to the Texans’ practice squad in December.

In 2020, Williams appeared in six games for the Giants and recorded one tackle and no interceptions.

Fields, 24, wound up going undrafted out of Clemson. He later agreed to a three-year, $1.755 million contract with the Chiefs.

Kansas City traded Fields to the Vikings coming out of the preseason for a 2021 seventh-round pick. However, Minnesota elected to waive him and he was later claimed by the Texans.

In 2020, Fields appeared in four games for the Vikings and Texans, recording two tackles and no interceptions.