Ian Rapoport reports that the Texans are aware that veteran DL J.J. Watt deserves clarity regarding his future in Houston and it’s something both sides want to figure out. 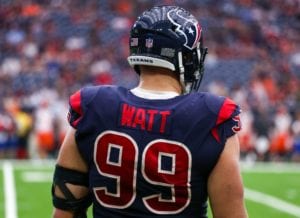 Watt is wondering what his status will be going forward and Rapoport says it’s fair to wonder whether this will be the end of his time in Houston.

Watt’s name has come up as a potential trade option dating back to last year, so this shouldn’t come as a big surprise. He’s entering the final year of his contract and with all that’s going on with Deshaun Watson, it’s possible the team could be looking to move in a new direction this offseason and they work to rebuild their defensive unit.

Meanwhile, James Palmer reports that the belief with teammates and coaches he’s spoken to is that Watt has played his last game as a Texan. A few sources told Palmer that this was the mood in the locker room after their final game.

In 2020, Watt appeared in all 16 games for the Texans and recorded 52 tackles, five sacks, an interception, two forced fumbles, a recovery, a defensive touchdown and seven passes defended.

We’ll have more regarding Watt as the news is available.