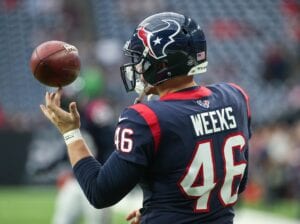 This comes just a few hours after the news that the Texans waived LS Anthony Kukwa.

Weeks, 35, wound up signing on with the Texans as an undrafted free agent out of Baylor back in 2010.

In 2020, Weeks appeared in all 16 games for the Texans, making one tackle for them on special teams.