According to Aaron Wilson, the Texans hosted free agent TE Geoff Swaim and LB Kyle Emanuel for visits on Monday. 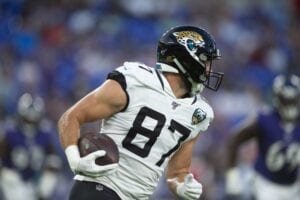 NFL teams are unable to try out free agents, but teams are permitted to give physicals prior to a possible signing.

In 2019, Swaim appeared in six games for the Jaguars and caught 13 passes for 65 yards receiving and no touchdowns.

Emanuel, 28, is a former fifth-round pick of the Chargers back in 2015. He played out the final year of his four-year, $2,498,572 contract with the Chargers and was testing the open market as an unrestricted free agent for the first time in his NFL career when he retired.

Emanuel opted to come out of retirement in March and has been testing the open market ever since.

In 2018, Emanuel appeared in all 16 games for the Chargers and recorded 28 tackles, one sack and fumble recovery returned for a touchdown.