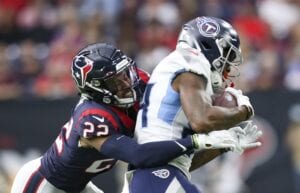 Coulter, 21, was a three-year starter at Rhode Island before being selected by the Texans in the fifth round of the draft. He signed a four-year rookie deal worth $3,587,952 that includes a signing bonus of $292,952.

During his three-year career at Rhode Island, Coulter appeared in 34 games and recorded 132 receptions for 1,855 yards (14.1 YPC) and 12 touchdowns.