According to Aaron Wilson, the Houston Texans are promoting C Jimmy Morrissey from the practice squad to the active roster. 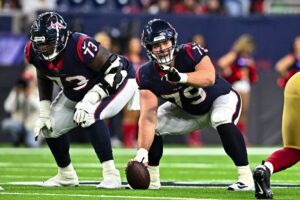 Mark Berman adds the Texans are filling the vacancy on the practice squad by signing OL Tre’Vour Wallace-Simms.

Morrissey, 23, was a seventh-round pick by the Raiders in the 2021 NFL Draft out of Pittsburgh. He signed to a four-year, $3.6 million rookie contract but was among their final roster cuts coming out of the preseason and re-signed to Las Vegas’ practice squad.

The Texans later signed Morrissey off of the Raiders’ practice squad in October. Houston re-signed him this offseason.

In 2021, Morrissey appeared in five games for the Texans, starting four games at center.

Wallace-Simms, 24, signed with the Jaguars as an undrafted free agent out of Missouri in 2020. He was waived coming out of camp and re-signed to the practice squad.

Wallace-Simms bounced on and off the Jaguars’ practice squad in 2020 before signing a futures deal for the 2021 season. He was again waived and re-signed to the practice squad once the season began.

Jacksonville released him in January and he caught on with the Texans for training camp. However, he was again released coming out of the preseason.

For his career, Wallace-Simms has appeared in five games with no starts for the Jaguars.