Jeremy Fowler of ESPN reports that the Texans are re-signing OT Roderick Johnson to a one-year deal on Saturday for the 2021 season. 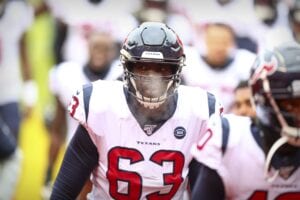 The Texans later claimed Johnson off of waivers only to release him coming out of the preseason. Houston declined to tender Johnson a restricted offer last year before re-signing him to a one-year, $1.75 million deal soon after.