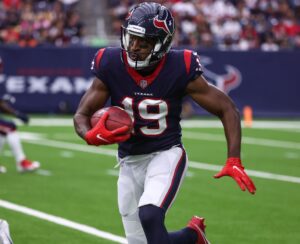 This comes shortly after the news that the Texans are releasing OLB Whitney Mercilus.

It appears as though the Texans have hit the point where they’re ready to turn things over to their young players from here on.

Roberts, 33, is a former third-round pick of the Cardinals back in 2010. He played out his rookie contract in Arizona before signing a four-year, $16 million contract with Washington in 2014.

From there, Roberts had brief stints with the Lions, Falcons and Jets before the Bills signed him to a contract in 2019. He returned to Buffalo the following year and joined the Texans on a two-year contract worth up to $6 million this past March.

In 2021, Roberts has appeared in six games for the Texans and caught one pass for 35 yards receiving and no touchdowns. He also totaled 386 kick return yards and 33 punt return yards.