ESPN’s Adams Schefter reports that the Houston Texans have reached an agreement with CB Jonathan Joseph who gets $48.75 million over five years and $23.5 guaranteed, including $12.5 signing bonus.

The Lions and Bengals were rumored to be in on Joseph yesterday but obviously situations are fluid and the price tag Nnamdi Asomugha may have forced the Texans to make an aggressive play for Joseph.

Secondary was the Texans biggest issue heading into free agency and Joseph is a great addition for Houston. I really like the Texans on paper especially with the additions of J.J. Watt and Brooks Reed. Maybe this is the year that someone finally unseats Peyton Manning for AFC South. 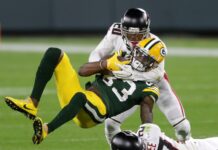