The Houston Texans are signing CB Rasul Douglas to a contract on Tuesday, according to Aaron Wilson. 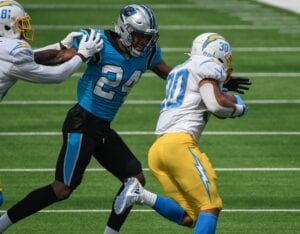 Douglas played out the final year of his four-year, $3.17 million contract and made a base salary of $754,750 for the 2020 season with Carolina. He later signed a one-year, $990,000 deal with the Raiders this offseason, but Las Vegas released him on Monday.