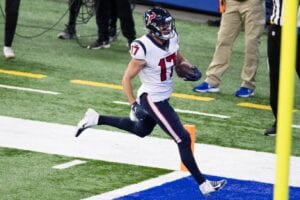 Hansen, 26, is a former fourth-round pick of the Jets back in 2017. He was entering the second year of his four-year rookie contract worth $2,819,648 when the Jets elected to waive him as they trimmed their roster down to the 53-man limit.

The Patriots claimed Hansen off of waivers shortly after. From there, he had brief stints with the Broncos, Titans and Saints before the Texans claimed him off waivers in 2019.

In 2020, Hansen appeared in five games for the Texans and caught 17 passes for 236 yards receiving and one touchdown.