According to Paul Kuharsky, the Titans are activating TE Tommy Hudson from the physically unable to perform list. 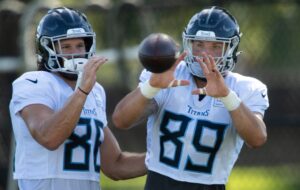 Hudson, 25, wound up going undrafted out of Arizona State back in 2020. He later signed a rookie contract with the Titans but was added to their practice squad coming out of training camp.

Tennessee brought Hudson back on a futures contract this past January before once again cutting him loose coming out of the preseason.

In 2021, Hudson appeared in five games for the Titans and caught three passes for 31 yards receiving and no touchdowns.