The Tennessee Titans announced Saturday that they’ve elevated FB Tory Carter and DL Amani Bledsoe to their active roster for Sunday’s game against the Jets. 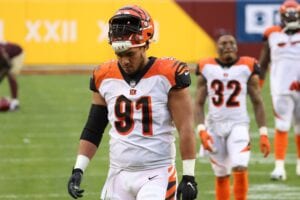 Bledsoe, 23, signed with the Titans as an undrafted free agent out of Oklahoma in 2019. Tennessee waived him coming out of camp and re-signed him to the practice squad.

The Titans re-signed Bledsoe to a futures deal entering 2020 but waived him that summer. He caught on with the Bengals and landed on their practice squad after training camp before eventually returning to the Titans’ practice squad last month.

In 2020, Bledsoe appeared in 14 games for the Bengals and recorded 17 total tackles and two pass defenses.