Ian Rapoport of NFL Media reports that the Titans are expected to bring in free agent RB Adrian Peterson for a workout this week following the news that Derrick Henry could be out for the season with a foot injury. 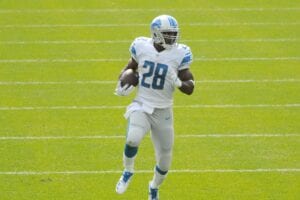 This is the first reported interest in Peterson since the free agent market opened back in March.

During the offseason, Peterson told Sirius XM NFL Radio that he’s hoping to sign on with a contender and get an opportunity to compete for a Super Bowl.

“I’m looking for a contender,” Peterson told SiriusXM NFL Radio, via NFL.com. “I’m looking for a team that’s built to go and chase a championship. That’s my ultimate goal, and I feel like I can really help to contribute in accomplishing that. A team with a good quarterback, a good defense and some playmakers on the offensive side of the ball. For me to be able to get into that type of situation would be perfect.”

Washington brought Peterson back on a two-year contract worth $8 million that included an option before releasing him coming out of the preseason last year. He eventually signed on with the Lions.