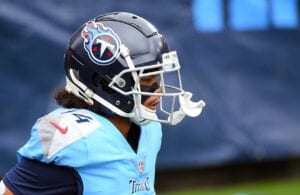 Raymond, 26, wound up signing a three-year, $1.62 million contract with the Broncos as an undrafted free agent out of Holy Cross back in 2016. He lasted just over a year in Denver before he was waived and later claimed by the Jets in 2017.

Since then, Raymond had multiple stints with the Giants and Titans but wound up signing on with Tennessee’s practice squad in September of last year and was promoted to the active roster after a month.

In 2020, Raymond has appeared in 13 games and recorded nine receptions for 187 yards receiving (20.8 YPC) and no touchdowns, to go along with 275 kickoff return yards and 208 yards on punt returns.