Titans HC Mike Mularkey told reporters after Sunday’s game that QB Marcus Mariota played through a injured knee that he suffered early on in the game, per Jim Wyatt.

If Mariota ends up missing any time, the Titans would turn to Matt Cassel at quarterback with Brandon Weeden operating his backup.

In 2017, Mariota has appeared in 11 games and thrown for 2,423 yards while completing 63.2 percent of his passes to go along with 10 touchdowns and 12 interceptions. He has also rushed for 213 yards and five touchdowns. Pro Football Focus has him rated as the No. 10 quarterback out of 38 qualifying players.

We’ll have more regarding Mariota’s injury as the news is available. 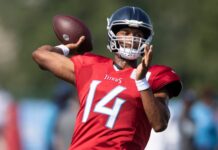 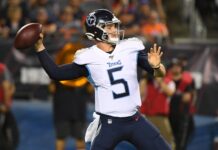