According to Field Yates, the Tennessee Titans have restructured WR Robert Woods‘ contract. 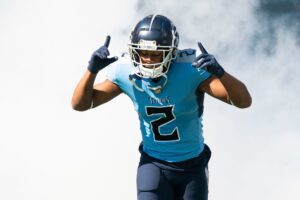 The Titans added an additional $2.6 million in cap space with the move, per Yates, which should help them get through the remainder of the season.

Woods later signed a four-year, $68 million extension with the Rams but was traded to the Titans ahead of the 2022 season. He stands to make base salaries of $5.5 million and $7.5 million over the final two years of the agreement.