Update: The Vikings released a statement announcing they have not received any positive COVID-19 test results as of this morning but they are still shutting down for the time being out of caution.

Statement from the #Vikings pic.twitter.com/JMG136w2ci

Per Ed Bouchette, the Steelers released a statement saying they’ve been told to prepare for this week’s game as normal until told otherwise.

According to Tom Pelissero, the Titans have suspended team activities after having three players and five personnel members test positive for COVID-19.

Pelissero reports the Vikings have also suspended team activities for the time being.

The Titans released the following statement:

Statement from the #Titans on the eight new positive COVID-19 cases: pic.twitter.com/wvmEw7ZSi2

Paul Kuharsky confirms a report from ESPN’s Dianna Russini that the Titans team facility will be closed until Saturday.

Mark Maske of the Washington Post says the positive tests are confirmed and there’s no current suspicion of this being a false positive situation.

He adds the NFL is going “day by day” with Tennessee’s situation and will evaluate the shutdown of in-person activities based on expert consultation and testing results, leaving the door open for the team to get back into the facility before Saturday.

Titans OLB coach Shane Bowen tested positive for COVID-19 this past weekend and did not make the trip to Minnesota for the team’s road game against the Vikings.

However, it appears the virus still spread and the Titans have suffered the first COVID-19 outbreak of the 2020 season.

We’ll have more on the situation as the news is available. 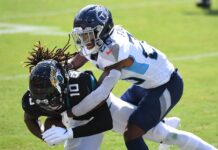 The beginning of the end to the 2020 season.

Hope not, players and staff gotta be more careful!