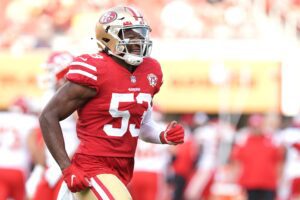 Griffith, 24, signed with the 49ers as an undrafted free agent out of Indiana State following the draft in April of 2020, but San Francisco waived him in August.

Griffith caught on to the Colts’ practice squad briefly in October before returning to the 49ers practice squad later that month. The 49ers signed Griffith to a futures deal last January.

During his senior year at Indiana State in 2019, Griffith recorded 132 total tackles, including 9.5 for a loss, 3.5 sacks, one forced fumble, two recoveries including one returned for a touchdown and one interception.