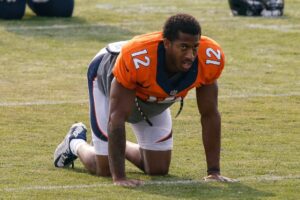 Benson, 24, originally signed with the Broncos as an undrafted free agent out of East Central University in 2019. After the Broncos waived him before the season began, Benson caught on with Denver’s practice squad, where he remained the rest of the year.

Benson signed a futures contract with Denver in January of 2020, and once again spent the entire season on the practice squad after the team waived him at final cuts.

Benson most recently re-signed with Denver to a futures deal this past January.

In his final year at college in 2018, Benson caught 45 passes for 507 yards and four touchdowns.