Mike Garafolo of NFL Media reports that the Patriots are trading WR N’Keal Harry to the Bears on Tuesday. 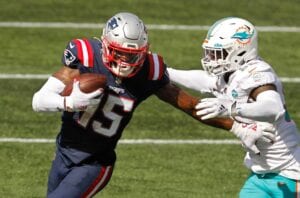 According to Ian Rapoport, the Patriots will receive a 2024 seventh-round pick from Chicago.

Harry has been available for trade for a few years now, but the market was clearly very limited, which is evident from the low draft pick heading back to New England.