Ian Rapoport of NFL Media reports that the Saints are trading DL Malcom Brown to the Jaguars on Tuesday. 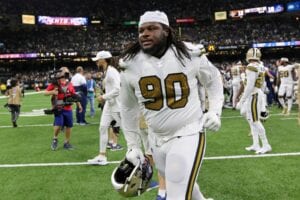 According to Rapoport, the Jaguars are signing Brown to a two-year contract worth $11 million with $8 million guaranteed.

The Saints had been shopping Brown in recent weeks and were reportedly prepared to release him if no trade surfaced.

However, Jacksonville apparently stepped up to close the deal.

The Patriots declined Brown’s fifth-year option, making him eligible for unrestricted free agency in 2019. He signed a three-year, $15 million deal with the Saints.

In 2020, Brown appeared in 13 games for the Saints, recording 27 total tackles and one sack. Pro Football Focus had him rated as the No. 34 interior defender out of 125 qualifying players.