The Minnesota Vikings announced that they have placed DT Armon Watts on injured reserve and signed DE Curtis Cothran and CB Kemon Hall to their practice squad.

The Vikings cut C John Keenoy from their taxi squad and placed DE Stacy Keely on their PS injured reserve to make room for them.

The #Vikings have signed DE @EddieYarbrough and placed DT Armon Watts on IR.

Watts, 23, is a former sixth-round pick in the 2019 NFL Draft out of Arkansas. He is finishing the first year of his four-year, $2.7 million rookie contract.

In 2019, Watts appeared in seven games for the Vikings and recorded 13 total tackles, 1.5 sacks, one forced fumble, and one pass defense. 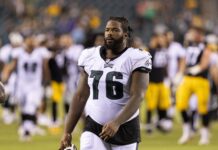