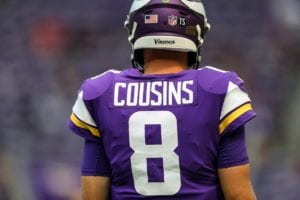 Cousins can return to training camp as early as Tuesday, but the good news is that he has minimal symptoms at this time.

Cousins, 33, is a former fourth-round pick of Washington back in 2012. He played out the final year of his rookie contract before being franchised in back-to-back seasons.

In 2021, Cousins appeared in 16 games for the Vikings and completed 66.3 percent of his passes for 4,221 yards, 33 touchdowns and seven interceptions. He also rushed for 115 yards and a touchdown.