Nicki Jhabvala reports that Washington is elevating LB Jared Norris to the active roster for their Week 1 game. Norris will revert back to the practice squad after the game without being placed on waivers. 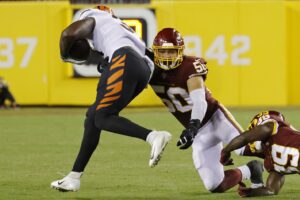 Norris, 28, went undrafted out of Utah in 2016 before catching on with the Carolina Panthers. He signed a two-year extension with the team in 2019 but was eventually waived.

He signed with Washington in 2020 but was waived and added to the practice squad. Norris appeared in two games for the team, playing primarily on special teams.

Norris re-signed with Washington in 202 and was waived at the end of August. He was then signed to the practice squad the following day.

In 2020, Norris appeared in 11 games for Washington and recorded three tackles.