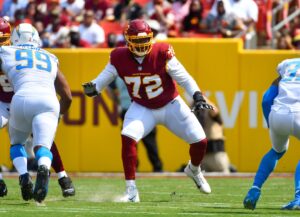 At $12.5 million per year, Leno ranks No. 22 in terms of the highest-paid left and right tackles in the NFL.

He was entering the final year of his deal and set to make a base salary of $8.9 million in 2021 when the Bears designated him a June 1 cut in the offseason.

From there, Washington signed Leno to a one-year, $5 million deal for the 2021 season.

in 2021, Leno has started 16 games for Washington, spending time at both left and right tackle. Pro Football Focus has him rated as the No. 18 offensive tackle out of 82 qualifying players.