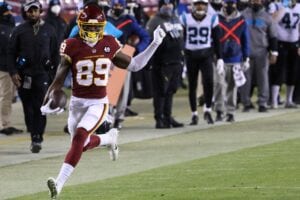 Sims, 25, wound up going undrafted out of Alabama back in 2018. He was placed on injured reserve a few weeks into the 2018 season. Washington waived Sims coming out of the preseason last year and bounced on and off the active roster.

The WFT promoted him back in September and stayed on the active roster all of last season.