Tania Ganguli of the Florida Times Union writes that the Jaguars are unlikely to release Mike Thomas because of the fact that his salary and bonus are both guaranteed for the upcoming season.

That’s certainly a likely consideration, but it’s hardly going to be enough to keep him around for more than the upcoming season. Thomas still has plenty of time to turn things around and endear himself to the Jaguars’ new coaching staff, but he certainly has work to do.

Mark Long of the Associated Press tweets that he’s becoming “less convinced” that WR Mike Thomas will be on the Jaguars roster following training camp.

Heading into last season, Thomas was the Jaguars No. 1 wide receiver, but he never lived up to the team’s expectations for him. Now Jacksonville has a new coaching staff in place, which doesn’t bode well for underwhelming players with sizable contracts. There seems to be a decent chance that Thomas could drop down to No. 4 or 5 on the depth, which would make him expendable, based on the salary that he’s set to make. 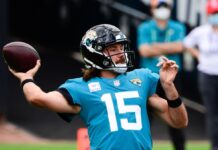 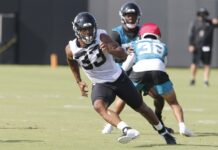 186,384FansLike
7,623FollowersFollow
275,844FollowersFollow
© NFLTradeRumors.co is an independent news source and has no affiliation with the National Football League (NFL), NFL.com, or any team(s).
wpDiscuz