Ian Rapoport of NFL Media reports that Jets rookie QB Zach Wilson is believed to have suffered a PCL injury to his knee. 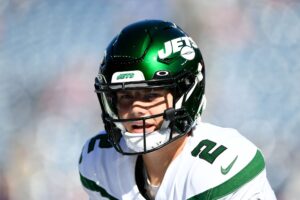 The plan from here is that Wilson will undergo an MRI on his knee Monday to determine the severity of the injury, but the expectation is that he will at least miss some time.

Wilson took a big hit from LB Matt Judon and was later replaced by Mike White.

Wilson, 21, was a three-year starter at BYU and a first-team All-Independent league selection as a junior. The Jets drafted Wilson with the No. 2 overall pick.

We will have more on Wilson as the new is available.