49ers DE Dee Ford told reporters on Friday that he had knee surgery a couple of weeks after the season. Ford said it was “a pretty extensive cleanup,” but he feels great now.

“We were spot-on with the injury as far as diagnosing it in training camp,” Ford said, via ESPN.com. “I had a severe case of tendinitis. … With my position, that’s a blown tire. I feel great right now. I’m able to actually explode off of this knee. Thinking back on it, I can’t believe I played a whole season on it, and we knew at the end of the day what we had to do. It had to be surgical, but I didn’t want to miss the season. We had too much going on. I didn’t want to miss that. It’s in the bag now, though, I’m confident in that.” 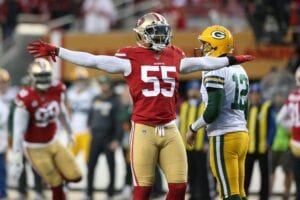 “Anytime you are dealing with a chronic issue, you are always on the clock,” Ford said. “So if I’m able to play, I’m going to play. As of right now, I’m just getting as healthy as I can. … I know exactly what I felt like last year, [and] doing the things that I’m doing now, it’s like night and day. We’ll just play it by ear once everything gets going. We haven’t really had an offseason, no one has really been in competition, so it’s just really hard to measure where you’re at. So we are going to take it one day at a time and just keep getting this thing as strong as we can possibly get it so we can sack some quarterbacks.”

Last year, Ford was limited with knee tendinitis and a hamstring injury.

Leading up to the draft, Ford came up as a potential trade candidate. However, it didn’t make a lot of sense from a cap standpoint for the 49ers to trade him just a year after acquiring him from the Chiefs and signing him to an extension.

Ford, 29, was taken with the No. 23 overall pick by the Chiefs back in 2014. He was in the final year of his four-year, $8.158 million rookie contract when the Chiefs picked up his fifth-year option and later traded him to the 49ers for a 2020 second-round pick.

186,306FansLike
7,623FollowersFollow
276,375FollowersFollow
© NFLTradeRumors.co is an independent news source and has no affiliation with the National Football League (NFL), NFL.com, or any team(s).
wpDiscuz