The San Francisco 49ers have designated S Jimmie Ward and CB Jason Verrett to return from the injured reserve and PUP lists on Wednesday, per Aaron Wilson. 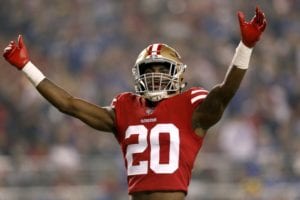 This officially opens a three-week window of time for them to be added to the active roster or they would miss the remainder of the NFL season.

In 2021, Ward appeared in 16 games for the 49ers, picking up 77 tackles including one tackle for loss, two interceptions including a touchdown, and six passes defended.

Verrett landed on injured reserve for three consecutive years. He missed all of 2018 due to a ruptured Achilles. From there, he signed with San Francisco in 2019 and returned to San Francisco on another one-year contract in 2020.

He signed a one-year deal with the 49ers worth $5.5 million, with a chance to make $6 million had he made the Pro Bowl in 2021. San Francisco re-signed him to another one-year deal for 2022 after he missed the season with a torn ACL.